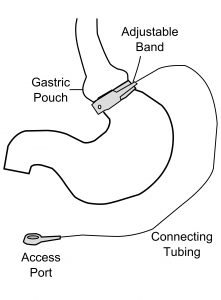 The laparoscopic adjustable gastric band is more commonly called by its trademark name, the LAP-BAND®. Sometimes it is simply called “the band.” In the gastric band, an adjustable plastic doughnut is wrapped around the stomach, limiting the how much food can pass through. Although the gastric band was a very common operation 10-15 years ago, it now represents the least common of the bariatric operations, for a number of different reasons.

Why is the Gastric Band Not Very Common Anymore?

One reason the gastric band is infrequently used is that the weight loss it provides is typically less than what you would get with a sleeve gastrectomy or gastric bypass.

Another reason for the decline in popularity has to do with the need for repeated adjustments. Patients with an adjustable gastric band need to come in to the office on a regular basis to have the band tightened or loosened. This is done using a needle which is passed through your skin into the  access port. With the sleeve gastrectomy and gastric bypass there is no need for adjustments like this.

Finally, the gastric band has a relatively high rate of reoperation. The band can sometimes slip out of position (called a “band slip”) and cause a partial or complete blockage of the stomach. Another operation would be required to put it back in place. Sometimes, the band can wear a hole through the side of the stomach. This is called an erosion and typically requires the band to be removed.

Make an Appointment
Scroll to top